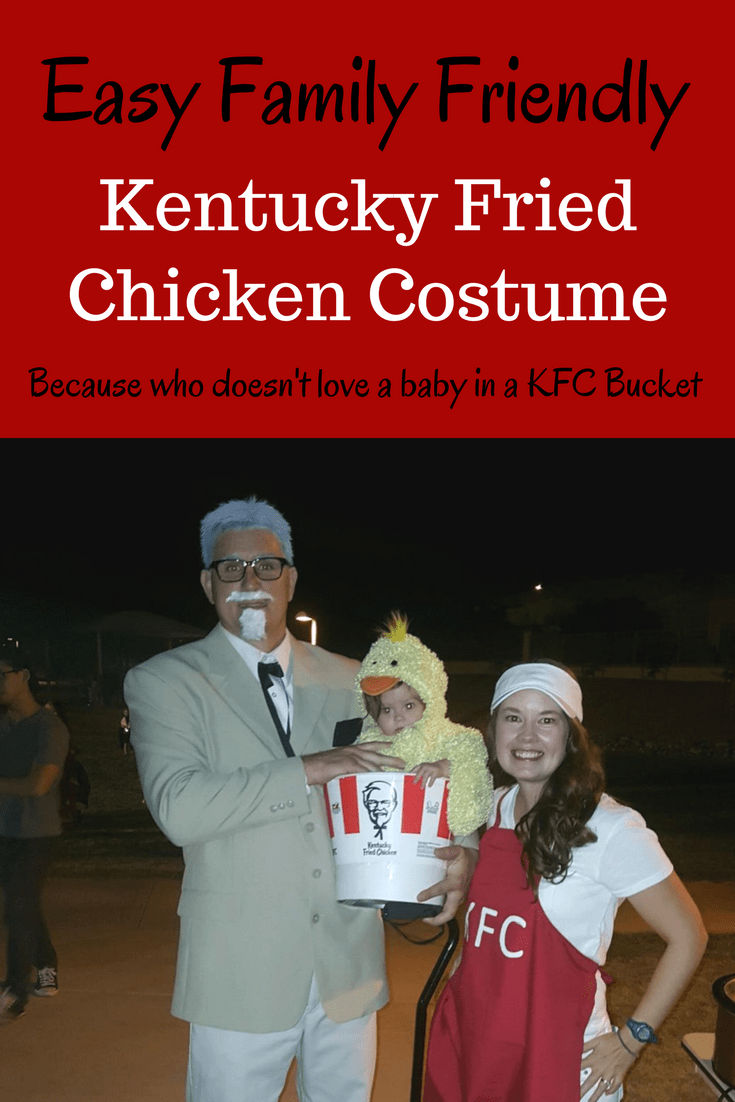 For your convenience, many of the products I link too are affiliate links which means I may earn money if you purchase a product I recommend.

Halloween is a big deal within my group of friends.  They go all out with their costumes and literally start planning their costume for the next year on November 1st.

I’m not as hardcore, but love finding inexpensive, but fun  DIY costumes.  This year we had to up our game a little bit since we had a baby in the mix.

My sister picked up the cutest chicken costume a few years ago and passed it down to me. 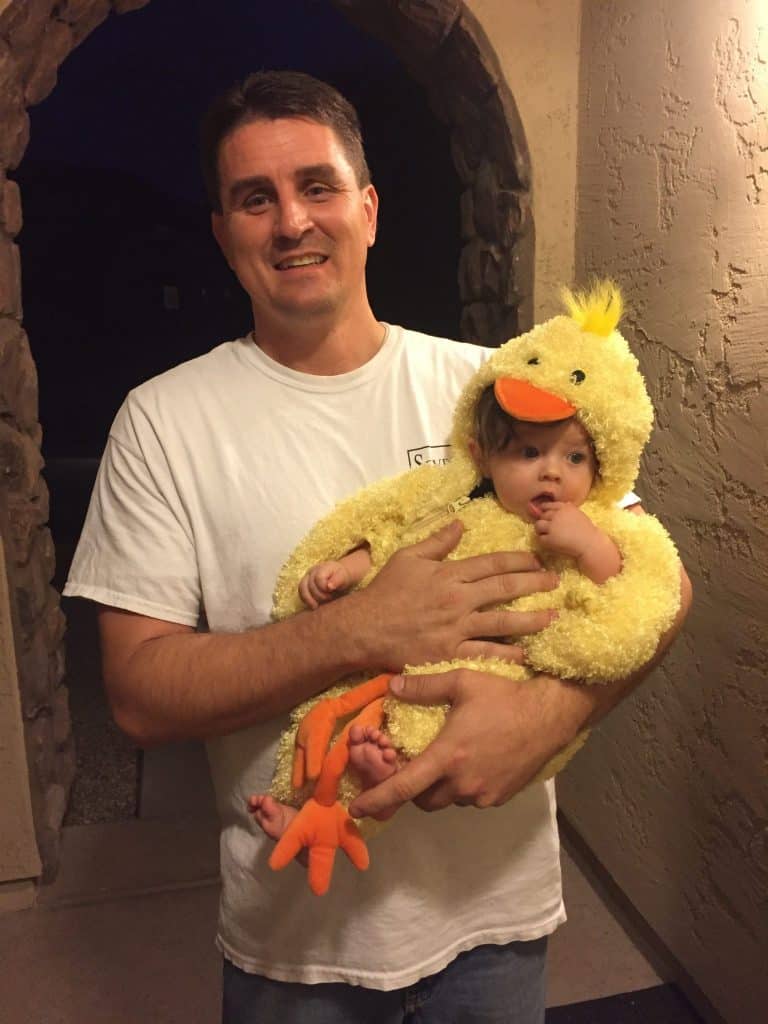 The costume was so cute that I had to center our Halloween costumes around it.

However, if you have ever tried to do a chicken center costume group, you’ll discover there aren’t a lot of options.  I was going to be boring and do as farmers, but last minute came up with the idea of doing a DIY Kentucky Fried Chicken theme.

It was seriously one of the easiest DIY costume ideas I’ve had.

We already had the chicken costume, so we bought a huge metal bucket and then KFC was nice enough to give us a few of their paper buckets.

We taped the paper over the metal and had a large enough bucket for Ella to sit in.  She was a bit hesitant at first but seemed to like it later. 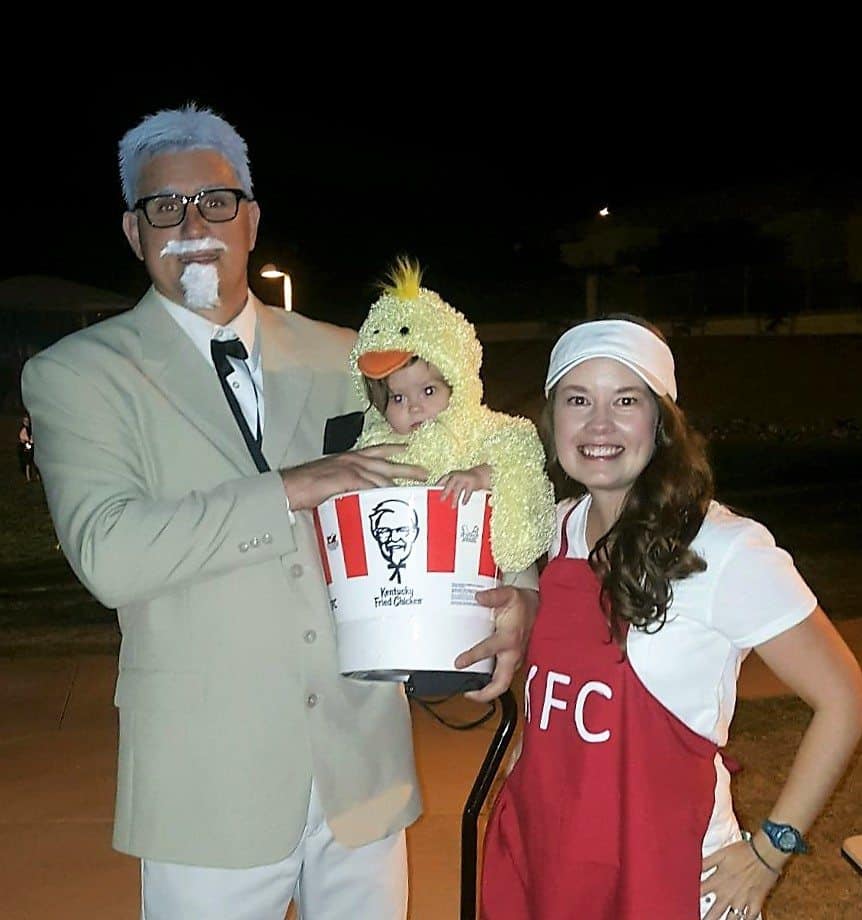 For Colonial Sanders, Aaron wore some light khaki pants with a light suit jacket (all purchased at Goodwill) and one of his white dress shirts.  I purchased 1/2 inch thick black ribbon for his tie and then used some extra fabric for his handkerchief (a black bandana would work too).

The hardest part was getting his facial hair right.

I looked everywhere for fake goatee at a decent price and finally gave up.  I wasn’t willing to spend $15 for a fake goatee.

We ended up purchasing some white fur that we cut and then stuck on with Gorilla Tape.  It wasn’t perfect and kept falling off, but it worked well enough for pictures.  Normally Gorilla Tape works great for stuff like this, but it was still over 90 degrees in Phoenix, so the sweat melted it off.

The glasses where reading glasses that we removed the lenses.  For his hair, we just used the cheap hair spray dye.  If we had planned a bit better I would have had him grow out his hair for a more authentic look.  I know it looks kind of purple in the pictures, but it really was white.

As for my costume, I used white pants and a white shirt and then made a red apron.  I was planning to purchase one, but finally gave up and just sewed one up rather last minute (the story of my life with Halloween costumes).

I used white fabric paint and 4-inch stencils for the KFC writing.  I completed the outfit with a white visor.

If you’ve never used stencils on fabric before I recommend doing a couple of test runs before using your apron.  You’ll need to hold the stencil firmly in place while dabbing the paint.  Don’t brush the paint or you’ll end up with paint that leaks outside the stencils.

If I were going to do it over again, I’d try and find some of the Iron Transfer Letters instead.

It is funny how sometimes the simplest costumes are the best.  We won two separate Halloween costume contests with this costume.  Of course, when you have a baby in a chicken costume, in a KFC bucket you have a very unfair advantage.

Ironically enough some of our friends also had a fast food theme.  They were a little more jockeresk.  Ella really wasn’t quite sure what to think of them. 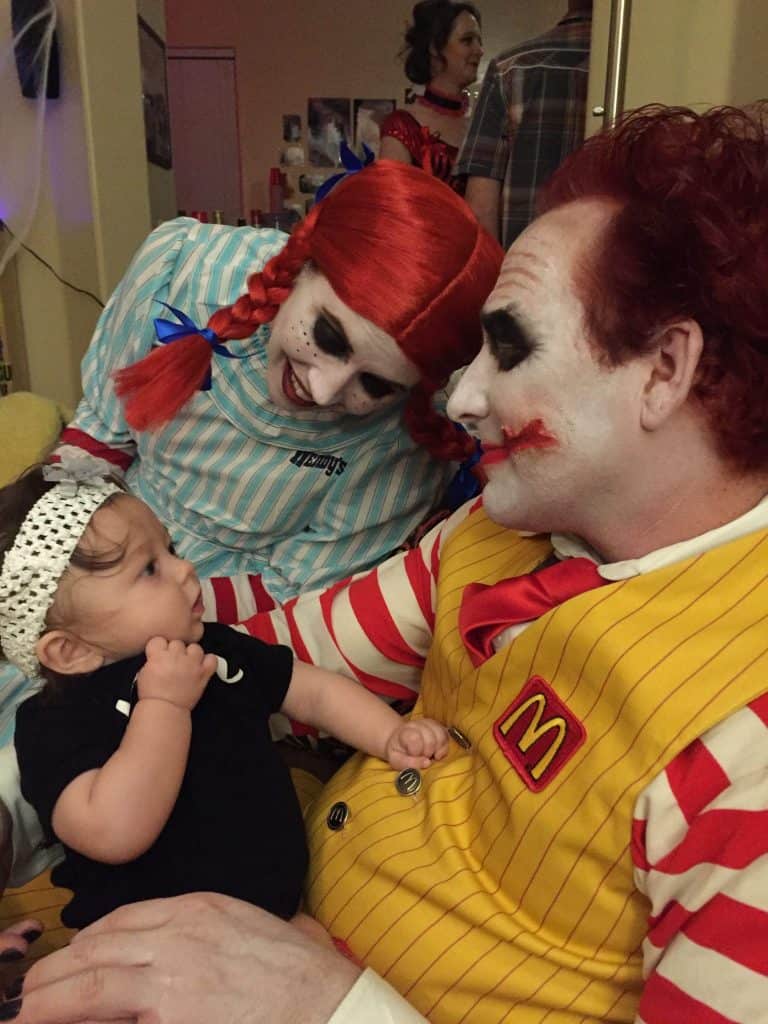 Happy Halloween and if you need a really simple DIY Halloween costume idea and have a baby feel free to steal our idea.

Not to brag, but we rocked it this year!